Regional Manager at BSA Polokwane, Andre Jansen van Vuuren, explains that extreme contamination by chicken waste is a common challenge faced by the chicken processing industry. “Subsequent frequent high pressure wash-downs cause water contamination within the bearing, reducing lubrication life. Owing to premature bearing failures and concerns around chemical and water ingress, Spif Chicken was compelled to replace bearing units with new bearings on the application every three months. In addition to facing regular downtime with accompanying time constraints and cost implications, our customer also had to put a detailed maintenance process in place.”

The blue line range of bearings has been specially developed by SKF for conveyor applications in food and beverage plants where bearings are exposed to extreme contamination making regular wash-downs and food safety the order of the day. Jansen van Vuuren says that the re-lubrication-free blue line bearing boasts a unique seal which makes use of multiple channels that direct water away from the sealing lip during wash-downs; the water exits the seal by gravity when the bearing is stationary. “The optional end covers and back seals prevent high pressure spraying from directly hitting the bearing seals during wash-downs, consequently further reducing the possibility of water ingress into the bearing.”

He adds that the back seal, which is seated on the shaft, provides an additional barrier to prevent contaminants from the lines reaching the enclosed bearing. Furthermore, the smooth housing surface eliminates crevices where soiling can occur, thereby facilitating the wash-down process

SKF received the order from Spif Chicken for the supply of four blue line bearing units in March 2020. The bearings, which were supplied as completely sealed units with end cover and back seal, were ex EDC (European Distribution Centre) and delivery was arranged via air freight. The bearings arrived just prior to South Africa’s national COVID-19 level 5 lock down which was implemented at midnight on 26 March. Jansen van Vuuren points out that these bearings are easy to install, requiring no customer training; Spif Chicken successfully completed the bearing installation under BSA Polokwane’s supervision.

As an essential service provider, Spif Chicken’s plant remained operational during the lock down period. “The blue line bearings have successfully passed their initial trial period and I am extremely pleased to report that, eight months on, the units are still running smoothly, showing no signs of premature failure. Alongside minimised plant stoppages and increased uptime and plant reliability, Spif Chickens is now able to implement wash-down procedures with complete confidence, freeing up time to focus on production. Spif Chicken is considering expanding our bearing solution to other production areas,” concludes Jansen van Vuuren. 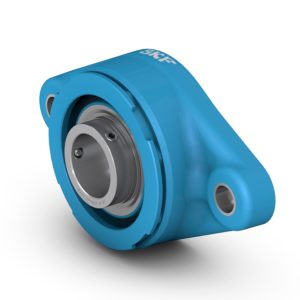 SKF’s mission is to be the undisputed leader in the bearing business. SKF offers solutions around the rotating shaft, including bearings, seals, lubrication, condition monitoring and maintenance services. SKF is represented in more than 130 countries and has around 17,000 distributor locations worldwide. Annual sales in 2019 were SEK 86 013 million and the number of employees was 43,360. www.skf.com

® SKF is a registered trademark of the SKF Group.

TOMRA Food and Ortofrutticola Parma: Selected quality, from the earth to the table