To make agriculture attractive to big investors, government must invest heavily in infrastructure that will facilitate farming activities and secure their investments, Director of the Institute of Social, Statistical and Economic Research of the University of Ghana, Professor Peter Quartey has said.

His comments come on the back of declining growth in the agriculture sector despite the Planting for Food and Jobs intervention which was supposed to give the sector a boost. The annual GDP figures released by the Ghana Statistical Service in April show that the country’s largest employer – agriculture sector – grew by 4.6 percent in 2019, a 0.2 percentage point decline from that of 2018, making it the slowest growth since recording 6.1 percent growth in 2017, from a previous 2.9 percent it recorded the previous year.

That is not all, the 2019 growth of 4.6 percent was also the least recorded in all three sectors of the economy, as industry and services grew at 6.4 percent and 7.6 percent respectively. Looking at the data from when the rebasing of the economy took effect (2014), the agriculture sector has constantly trailed the other two sectors in growth, with the exception of 2015 when it surpassed industry by 1.2 percentage point.

One of the major challenges in the sector include rampant land litigation issues which threatens the investments of businessmen and eventually, leads them to abandon the land, resulting in huge losses. There is also the problem of poor road networks linking farming communities to towns and cities which are the main markets for farmers.

For Prof. Quartey, until these serious issues are resolved, the agriculture sector will still be unable to attract big investors. “In any serious country that wants private investment in agriculture, you find government takes the initiative to create the enabling environment, then the private sector moves in. so if you want that large scale production, it is not only about subsidising fertilisers, but to help investors secure land.

Land is a big issue in large scale agriculture, and many investors have lost their money due to land litigation. So the first step is for government to acquire land or help the private investor acquire agriculture land. That for me, is the first major step.

After that, you look at irrigation infrastructure. The private investor cannot construct dams or roads before investing. So government has a role; and it is to create the enabling environment. Once, those things are available, every serious investor will want to go into agriculture,” he said in an interview with the B&FT.

What makes the situation very troubling is the fact that the agriculture is the largest employer of people in the country and has long been considered the spine of the economy. Therefore, a constant decline in growth puts a lot of livelihoods at stake.

Investment in agriculture has even become more necessary considering the damage the coronavirus pandemic has caused around the world. Due to shut down of borders and restrictions on movements, countries have adopted domestication and consuming what they produce.

Agribusinesses, on average, have lost 61.2 percent of monthly revenues as a result of COVID-19, the Agribusiness Sector Survey Report 2020, authored by the Chamber of Agribusiness Ghana (CAG) – an apex body for coordinating agricultural sector players in the country – has revealed.

It is, therefore, important for government to create the necessary enabling environment for investors to encourage them to push money into agriculture as it is the only sector that can still strive in this pandemic period considering food is a basic necessity of life.

Is Technological Innovation in Agriculture Enough To Secure Food Security in Ghana?

Urban spread is turning the lives of Ghanaian farmers upside down 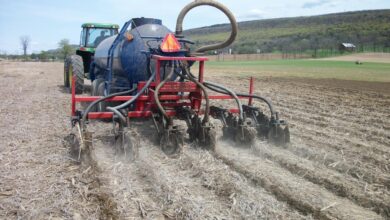