The Japan International Cooperation Agency (Jica) is investing $2.5 million in Sanergy. The U.S. Company will use the funding to produce fertilizer for agriculture and insect protein for animal feed in several African countries, including Kenya.

A new investor is interested in Sanergy. The U.S. Company is promoting an innovative approach to the circular economy in developing countries, including Kenya. The Japan International Cooperation Agency (Jica) is investing $2.5 million in Sanergy’s capital.

This equity investment will enable Sanergy to provide more fertilizer for agriculture and insect protein for animal feed. In Kenya, Sanergy already has a faecal sludge treatment plant with a capacity of 72,000 tons per year. “Kenya’s capital and largest city, Nairobi, had a population of 3.04 million in 2009 and is expected to reach 5.94 million by 2030. With the increase in population, the city’s waste volume is expected to rise from 1,848 tons per day in 2009 to 3,990 tons per day in 2030,” Jica explains. 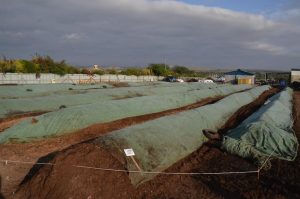 To achieve this result, Sanergy will use a simple, yet novel technique. The U.S. Company is breeding black soldier flies (BSF). The larvae of these insects are rich in sustainable, highly nutritious proteins. In the adult larval stage, the insects are dried and supplied in bulk to feed manufacturers for commercial use. At the end of the process, the waste is transformed into organic fertilizer. By supporting Sanergy’s activities, Jica also aims to enhance food security in Kenya. Currently, the Nairobi-based company collects 12,000 tons of waste each year and recycles it into products for agriculture and livestock.

By developing an enabling framework for the circular economy in developing countries, Sanergy supports sustainable waste management. Co-founded by David Auerbach, Lindsay Stradley, and Ani Vallabhaneni, the company is preparing to expand its operations to other countries, primarily in East Africa.

FAO warns Kenya, Addis to watch out for locusts in northeast Somalia