Ms Auta is among a small group of women changing the face of agriculture in Nigeria, a country where 95 per cent of farms are run by men.

She grows rice, maize and soybeans on a 20-hectare leased property in Niger, a state in the country’s Middle Belt region. A feat in itself given the average farm size in Africa is just 1ha and most farming is done by hand.

“What we do here is we hire hands from villages and they come work on the farm,” Ms Auta said.

Alluvial Agriculture co-founder and managing director Dimieari Von Kemedi has been involved in Africa’s agricultural industry for a decade but he has never seen a woman drive a tractor.

That’s all about to change though, as a result of a new initiative and women like Ms Auta.

Thanks to funding from the Mastercard Foundation, Alluvial is on a mission to teach women how to drive tractors and facilitate financing so they can become tractor owner-operators.

The training is being provided in conjunction with John Deere’s main dealership in Nigeria, Tata International.

After completing the three-week course, participants will form a cooperative and be provided with a 48 kilowatt (65 horsepower) John Deere tractor to work on farms as part of Alluvial Agriculture’s community block farm project.

The women will repay their loan with a percentage of the fees they earn, with the tractors likely to be paid off within two to three years. Mr Kemedi said the project was initially for 50 women but he was so inspired after hearing stories from the initial cohort that they have decided to extend that number to 100.

“We had a clear goal we wanted to achieve, which was to introduce people to the idea of women tractor operators,” he said.

“I have actually never seen a woman tractor operator before so we wanted to achieve that as part of our focus on supporting women in agriculture.”

Ms Auta was in the first cohort to take part in the program.

The progressive, 34-year-old farmer has long desired to learn how to drive a tractor but did not think it would be possible.

“It was actually easy; I learnt how to drive and how to fix in my implements – my harrows and ploughs – and how to use them on the farm,” she said.

“It was something I’ve been wishing to do so it was fun for me.”

The skills she has acquired ‘mean a lot’, and will be a game-changer for her business.

“Instead of having to wait on people, I can actually do it myself,” she said.

“And then I hope when people see a lady driving a tractor, other women will actually want to try.”

In Nigeria there is the dry season and the rainy season.

The rainy season usually starts in March but Ms Auta said it was really late this year, commencing in May.

August is the middle of the rainy season and it has rained every day this month.

“Most planting is done during the rainy season, although people are trying to embrace irrigation now so they can farm twice a year,” she said.

Ms Auta doesn’t have irrigation at present but hopes in time she will be able to do this as well.

She describes seeing the final result after countless hours of hard work getting a crop to harvest as ‘amazing’.

Her crops are usually provided to someone else to sell however next year she is planning to start milling them.

Like countless others in the agricultural industry, farming is in Ms Auta’s blood.

She grew up watching and learning how to farm from her father. Her father died three years ago but continuing to farm is a way of honouring his memory.

“I definitely feel he would be proud of me,” Ms Auta said. 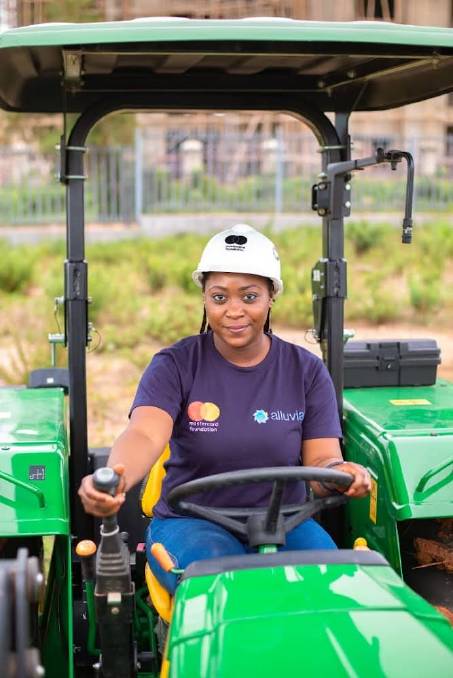 The solution to Africa’s food insecurity

Prior to his work with Alluvial, Mr Kemedi was an environmental activist and consulted for the oil industry, the United Nations Development Program and the UN Panel of Experts on Liberia.

He is now focused on Alluvial’s mission to solve food insecurity in Africa through block farming.

“The original mission was simply to facilitate in improving food security by founding a commercial rice farm,” Mr Kemedi said.

“We got a location of 2000 hectares and we went to the community to start production but when we got there we discovered that the amount of land on paper was much bigger than the amount of land that was actually available; farmers were already using it.

“We could not evict them from the land; we had to reevaluate our business model.”

Mr Kemedi said they have also enabled farmers to focus on production by buying their produce from them at the end of each season.

Farmers working with Alluvial make an average of $1000/ha each season, more than double what farmers outside the network earn.

“It (the block farm) evolved out of necessity and turned out to be a much better way of doing business than our original idea,” Mr Kemedi said. Ninety-five per cent of farms in Nigeria are run by men but mechanisation could lead to more women becoming involved in the industry.

Government concerns over farmers’ ability to manage more than 1ha due to the labour intensity of manual farming had stifled expansion, however this limitation could be removed with mechanisation.

“The difference between the ability to farm a large plot and a small plot is just mechanisation, that’s the difference,” he said.

Mr Kemedi said farmers need access to more land but this would also require some people to transition away from farming to manufacturing, services and other areas of work.

“One of the challenges in African agriculture which is affecting productivity is too many people are involved in farming,” he said.

“Many governments are looking for yet more people to get involved in agriculture.

“Agriculture doesn’t need more people; we just need better adoption of technology in agriculture and once the productivity improves significantly and we are self sufficient in food production, that will bring about the prosperity that will yield the resources needed to diversify the opportunities needed for work.”

A lifeline for farming machinery with new cassette seal