Abraham Mushivi is in no doubt about the impact that climate change is having on people’s lives in Angola, where he has been working with The Lutheran World Federation (LWF) for the past 15 years. “This is one of our big concerns,” he says, because the situation has been getting worse since 2012.” Five years of drought, followed by two years of flooding and a recent plague of locusts means that “food insecurity is increasing in many areas and people have no safe drinking water.”

Mushivi, who also goes by his Portuguese name Abrao, was born in a Zambian refugee camp, the son of Angolan farmers who fled their country when the war of independence broke out in 1966. In Meheba Refugee settlement, families were allocated a small plot of land and three years of food rations before having to manage on their own. His father, a skilled craftsman, taught fellow refugees how to make traditional tools, sieves, bows and arrows, fishing baskets and sleeping mats to help them become self-sufficient. These early experiences, Mushivi says, inspired him to study for an agricultural degree “to ensure that I could also make a contribution in teaching refugees to help improve their food security.”

After further studies, he began working in the humanitarian sector with Care International, before joining LWF’s operations in Zambia, then known as the Zambia Christian Refugee Service in 1996. Hired as their Agriculture and Livestock Officer, he was called upon to help manage emergency operations a few years later, as thousands of refugees poured into the north-west of the country to escape from conflicts in neighboring Angola and the Democratic Republic of Congo (DRC). 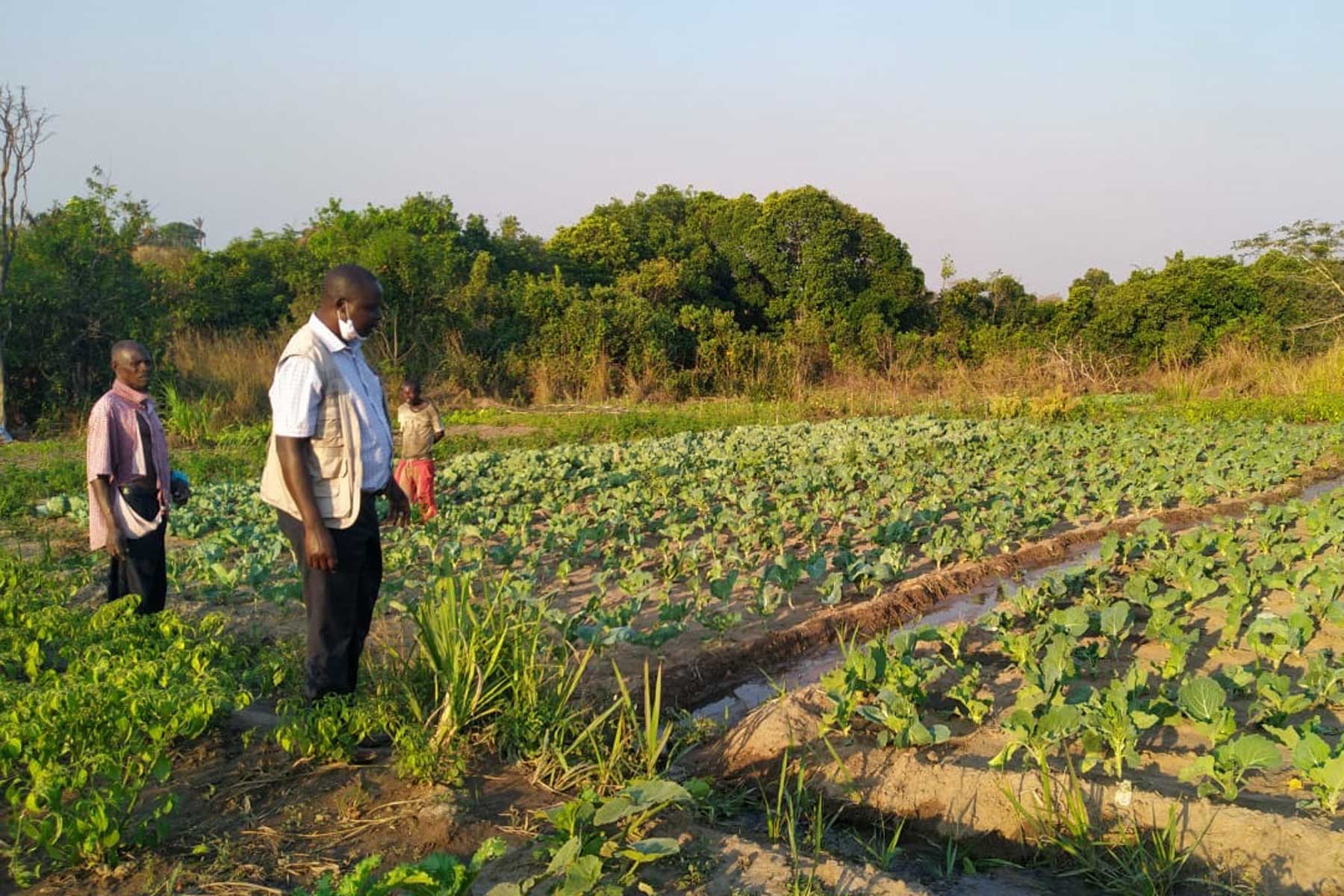 With the end of the long-running civil war in Angola in 2002, most refugees were repatriated back to their home country. Mushivi went too and was hired by LWF Angola, putting his skills and experience to work in this new context, as the country began the painstaking work of reconciliation and reconstruction. His job was to set up programs to accompany people moving from emergency handouts to self-sustainability, buying tools and seeds to distribute among returnees in the east of the country.

A major challenge was integration of those who had spent the war years in Zambia, DRC, or internal displacement settlements. “Many of them were children who were born in the camps and spoke no Portuguese, but my task was to help all these people from very different backgrounds to make a new home in Angola,” Mushivi recalls. Having struggled to learn Portuguese and integrate himself, he knew that what the returnees needed, as much as training, seeds and tools, was “to cultivate hope and confidence for a better future.”

The fundamental requirement for refugees and returnees, he reflects, “is to know that in any situation your rights can be suspended but, regardless of your status, no one can take away your dignity.” The first task, he continues, “is to reassure them of that dignity and the second is for them to share their hardships with neighbors or friends, creating a spirit of solidarity and confidence in the future.” 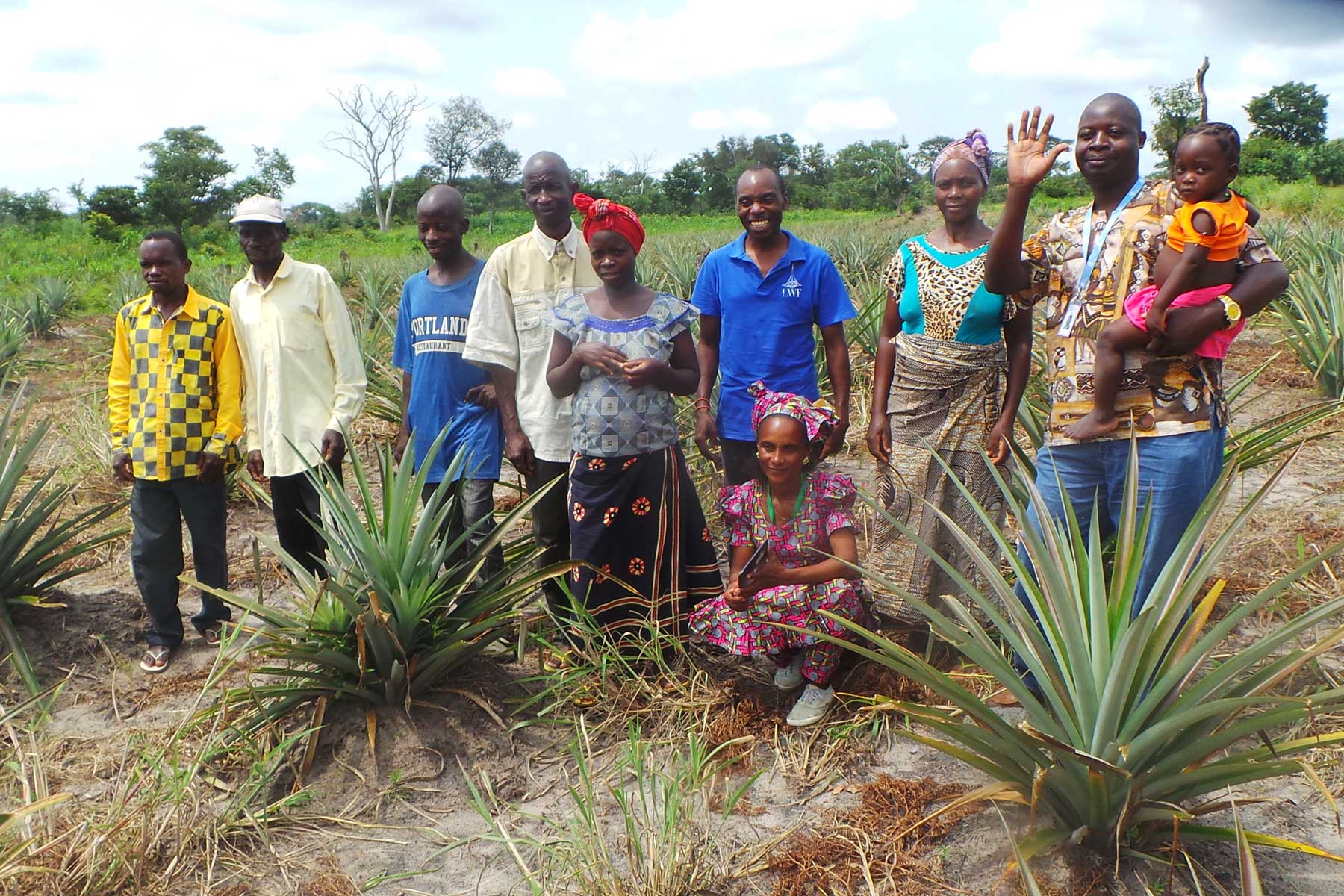 Mushivi with a group of returnees from the DRC in their pineapple field in Luau municipality, Moxico province. Photo: LWF Angola/Wamana Miji

Today, Mushivi is National Country Director for LWF Angola, based in the capital Luanda and overseeing 30 staff members, as well as several hundred volunteers, in three regional offices in the south and east of the country. He has many success stories to tell, in particular the setting up of Village Development Committees, where people are trained to lead local development projects and advocate for their rights at local, regional, national and even international level.

“Our main focus is empowering people to speak out for their rights,” he says, noting the difficulties farmers face when big companies seek to expropriate them from their resource-rich land. Despite a booming economy and the building of urban infrastructures, he says, “people in rural areas still lack basic needs. Roads are poor, they have no water, no schools for their children and no medicines in the hospitals so they are demanding that the government and big companies invest part of the money back into their communities.” Earlier this year, at least 10 people were killed in Lunda Norte province when security forces fired on protesters demanding better public services, including water and electricity, in the diamond-rich town of Cafunfu. 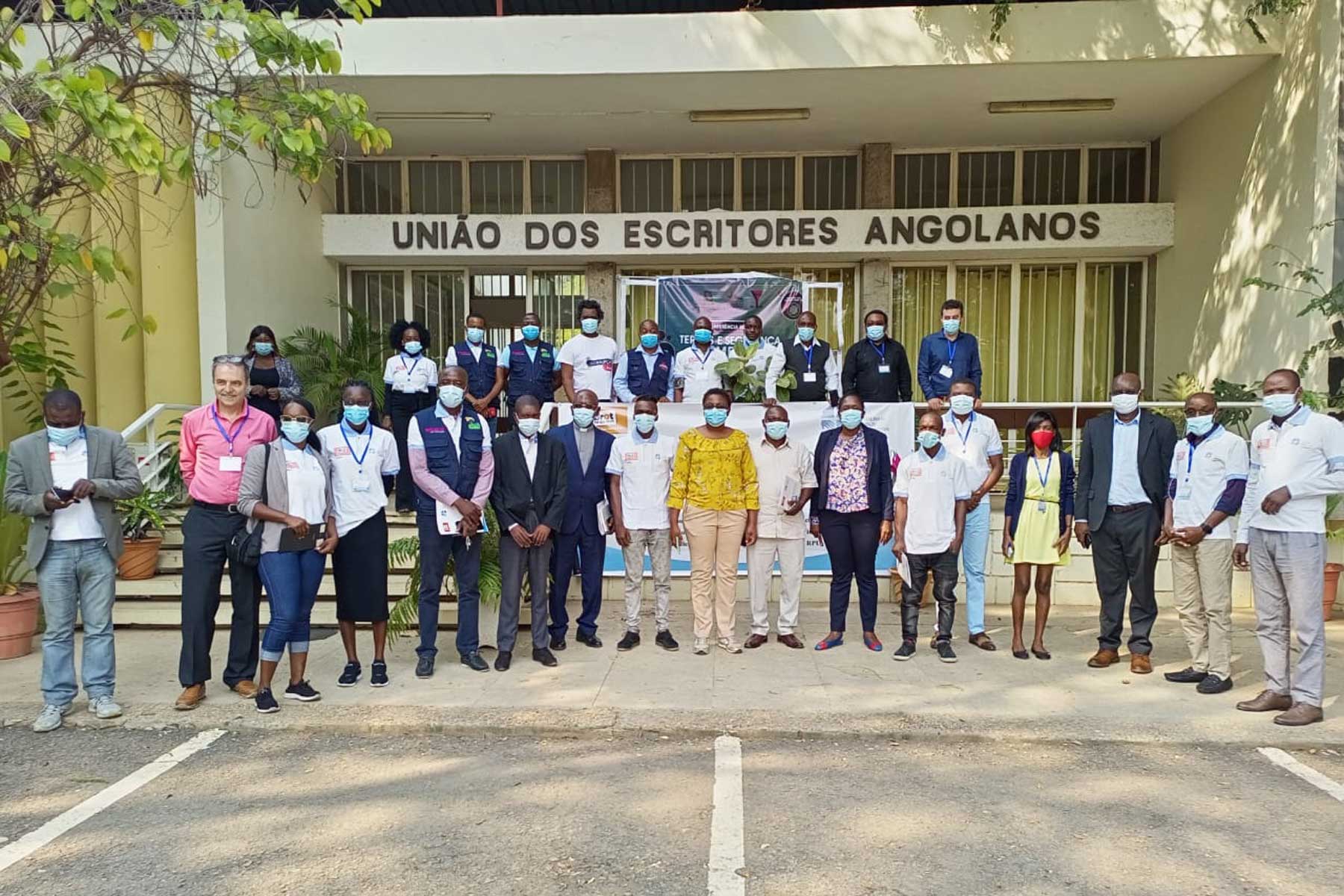 LWF Angola has run recent workshops in Luanda on government-proposed amendments to the land law and on follow up to the Universal Periodic Review process. Photo: LWF Angola/Sabino Calucango Casseno

Funded by the German aid agency Brot für die Welt, LWF works with a “local to global approach, preparing people at community level,” Mushivi explains. Recent initiatives include a national workshop on proposed government amendments to the land law and a second training workshop to follow up on recommendations of the Universal Periodic Review process for Angola. “We try to ensure that before land-grabbing issues escalate, we can prepare people by legalizing land titles, regularizing farmers’ associations and protecting villages through communal land demarcation,” he adds.

But despite the success stories, Mushivi is worried about the future of his adopted country. Nearly two decades on from the end of the war, he says “we are losing track on national reconciliation and there is increased manipulation of civil society for political interests.” The COVID-19 pandemic has further exacerbated problems of food security for many people and the damaging effects of climate change are increasingly visible as he travels around rural communities. 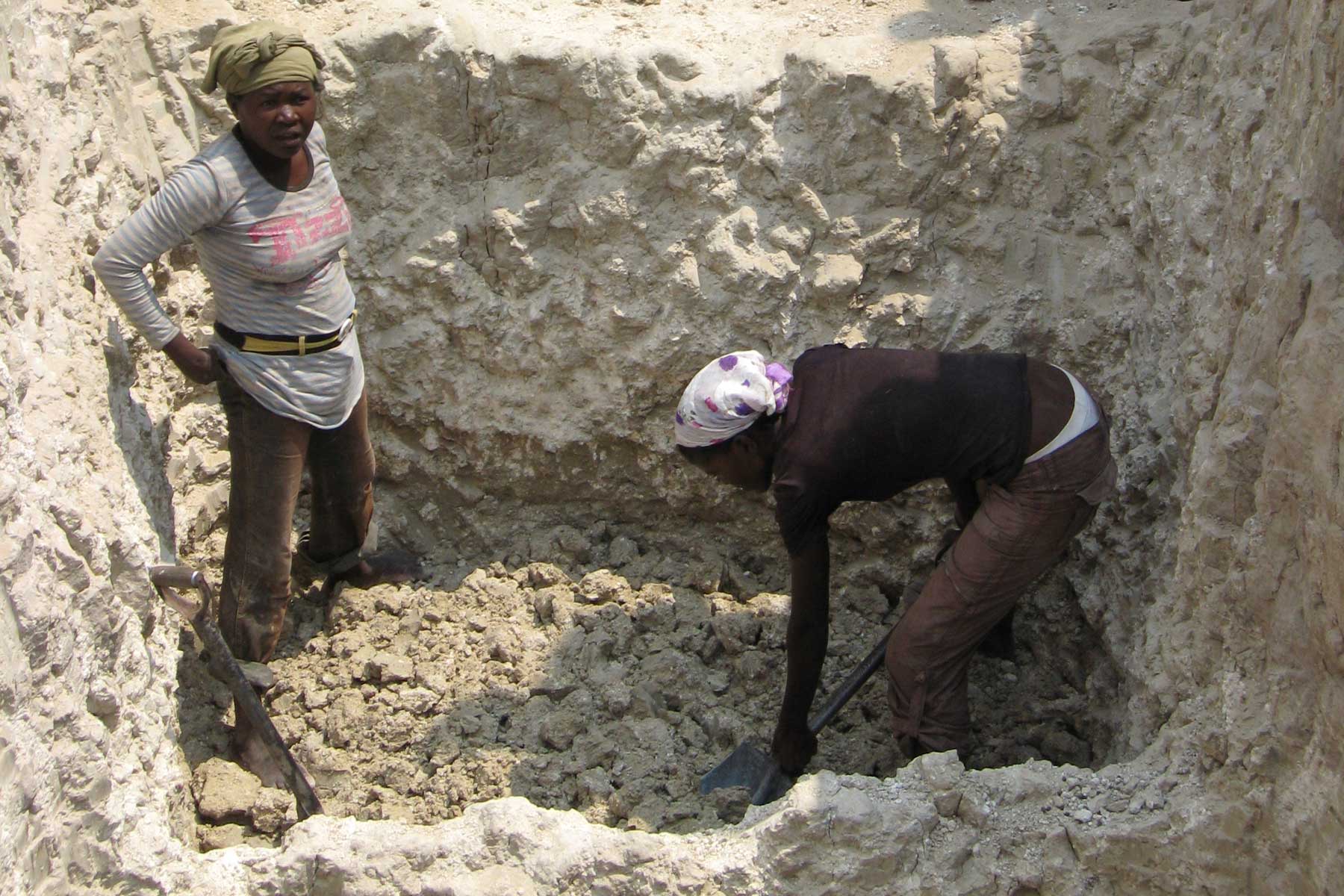 “The situation is very bad with rising malnutrition after the droughts and floods, as well as the locusts swarms that destroyed food crops across large parts of Southern Africa last year,” he says. People need food aid, as well as water and sanitation, with villagers in some areas walking up to 25 kilometers in search of bore holes for clean water, he adds. Artificial dams called ‘Chimpaka’, another source of water for domestic and livestock use, are not safe for drinking and dry up completely for several months of the year.

Among the most important aspects of his work today are natural resource management and disaster preparedness among these remote rural communities. LWF Angola is the longest serving international non-governmental organization in the country, adapting its operations, since 1986, from emergency relief to development, resilience building and sustainability for subsistence farmers facing an increasingly uncertain future.

World Humanitarian Day is observed each year on 19 August to honor humanitarian aid workers, including United Nations and other personnel, who are committed to the service of the world’s most vulnerable people and communities. It marks the day on which the former UN Special Representative of the Secretary General to Iraq, Sérgio Vieira de Mello, and 21 of his colleagues were killed in the bombing of the UN headquarters in Baghdad in 2003.

Zimbabwe’s poultry production set to rebound in 2021 after decline