Mary Rigo has been a spinach and tomato farmer for the past decade a few minute’s drive from here in Kirinyaga county, where she owns a two-acre farm about one hundred kilometres (just over 60 miles) northwest of Nairobi, Kenya’s capital.

Rigo did not not use fertilisers, relying instead on whatever fertility the land could offer to her vegetable crops. She has meager resources, so using fertilisers to maximise her farm’s productivity was not an option. But the years of trying to grow enough food without replenishing the soil had reduced what she was able to grow.

In 2018, Rigo was selected by a small enterprise, Safi Organics, to experiment with their new fertiliser Safi Sarvi, which was new in the market. After using it, she recorded a 30 percent increase in farm produce, and she was able to make a profit from selling her onions.

Rural farmers in central Kenya are mutiplying yields and earnings.

On her second fertilizer application, this time with Safi Sarvi ‘topper’, she doubled her earnings. She has been able to pay college fees for her two sons and plans to buy a second-hand van to transport her farm produce to market regularly.

“This is the kind of impact we would like to deliver to smallholder farmers across the African continent,” says Joyce Kamande, one of25 African entrepreneurs who spent six weeks at Oklahoma State University last year as part of the Mandela Washington Fellowship, a flagship programme of the U.S. government’s Young African Leaders Initiative (YALI).  Dr. Craig Watters, a clinical associate professor in entrepreneurship and director of The Riata Institute for Global Social Entrepreneurship is Oklahoma State University’s academic director for the fellowship. “These are all small businesses,” he said, “and most of these entrepreneurs have never seen their ventures in the context of industry and target markets and competition and growth, so they’re learning business practices.”

Safi Organics was also chosen for a scaling-up grant by the United States African Development Foundation  (USADF). Each year, USADF selects Africa’s top young entrepreneurs from among the Mandela Washington Fellowship recipients to receive catalytic seed funding through highly competitive business plan competitions.   Since 2014 in 37 countries, USADF has invested nearly $5.5 million in over 250 YALI entrepreneurs’ social enterprises.  In FY 2020, through a partnership with USAID and Citi Foundation, USADF will award $850,000 to young African entrepreneurs developing businesses for social and community change in 22 sub-Saharan countries.

Kamande’s passion for supporting small farmers grew from her own hard experiences growing up in a family struggling to survive on a landholding with limited space to grow crops and little access to soil amendments to increase productivity.

“My parents were peasant farmers and getting us to school or feeding our family was hectic, because they had to rely on the farm. [Sometimes] there was no rain,” Kamande says. “The lands were degraded, making it difficult to harvest enough produce to feed my family or sell. There were days we would go without food.”

From those years on her family’s farm, Kamande came to believe that all farmers deserved profits from their hard labour in the fields. She was determined to help make that happen.

Safi produces carbon-neutral fertilisers using a waste product from rice processing. The surrounding area of central Kenya is a center of cultivation of pishori rice – a fragrant long-grain rice that is part of the Basmati family. Using technology designed with the Massachusetts Institute of Technology, a U.S. university in Boston, the company turns rice chaff – a part of the plant’s husk – into organic fertilisers. The nutrient-rich material is readily available from rice growers, who otherwise would have to spend money disposing of it. 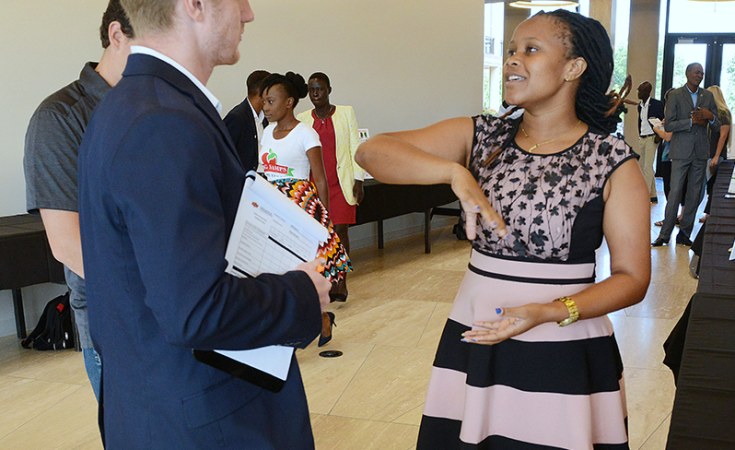 Oklahoma State UniversityDuring a poster presentation at the Spears School of Business, Joyce Kamande talks about her business, SafiOrganics, that she started in Kenya, which makes a carbon-neutral fertilizer for use by local farmers. Kamande was part of a group of 25 African entrepreneurs who spent six weeks on the OSU campus this summer as part of the Mandela Washington Fellows Institute for Young African Leaders.

Safi sells the fertiliser in 50-kilo bags to a wide range of farmers, including small scale and export-market farmers around the region. Each pack retails at U.S. $15, and is 40-50 percent cheaper than imported synthetic fertilisers.

The journey of Safi Organics started in 2015 during Kamande’s final year at the University of Nairobi, when she met her co-founder Samuel Rigu. “We both grew up in rural areas in Kenya, where farming was the core business of our families and community. We both had a keen interest in empowering our communities and providing solutions.”

Rigu graduated with a degree in agribusiness management. He, too, saw his family and his neighbors struggling. Farmers who could purchase expensive, imported fertilizers experienced reduced crop yields over time, as the chemicals degraded soil quality.

The Food and Agriculture Organization (FAO) Boosting Africa Soils Report posits that “Agriculture is the backbone of the African economy, accounting for approximately 20% of the region’s GDP, 60% of its labour force, 20% of its total exports and the main source of income for the region’s rural population. To achieve the agricultural growth and hunger and poverty eradication targets set under the … United Nations Sustainable Development Goals, it is necessary to significantly improve the productivity of Africa’s soils which are currently severely degraded.”

According to José Graziano da Silva, FAO Director-General, “We speak a lot of the importance of sustainable food systems for healthy lives. Well, it starts with soils, healthy soils.”

Efforts by African entrepreneurs such as Joyce Kamande to create fertilisers locally could make a significant difference on a continent where most farmers pay close to five times the global average price for fertilisers. Because yield-boosting soil additives are neither accessible nor affordable to most small farmers, Africa has low fertilizer-application rates compared to other regions.

“Many smallholder farmers,” Kamande points out, “use animal manure, which only gives micro-dosing and an unbalanced nutrient ratio to the degraded soil, or opt for cheap synthetic fertilisers that degrade and acidify the earth. Our product is superior, as it restores degraded lands, due to our ability to tailor-make fertilisers according to various soil deficiencies.”

Kamande admits that it has not been easy to convince farmers to use organic products. “Most small-scale farmers … don’t know that they increase their yields from more robust, locally made, carbon-negative organic fertiliser made by farm waste from companies such as Safi Organics.”

She says the SafiServi product “helps to promote soil health and nutrient retention and reduction of irrigation needs by 30%. Our fertiliser has a slow release rate of nutrients, which means that they don’t work instantly like synthetic fertilisers. But in the long run, it contributes to an increase in yields and an increase in income for our farmers.”

Safi’s brings its soil accelerators to the farmers.

Safi uses portable equipment that can be moved from farm to farm. The team collects rice crop residues from farmers. The mixture of rice chaff and other farm produce is burned under limited oxygen in an individual furnace. It is then blended with Safi’s own nutrient mix before packaging.Safi Sarvi is beneficial to smallholder farmers in many ways. The product has been a super booster for over 3,000 horticultural, fruits, legumes and cereal farmers who have reported an increase in productivity. Besides contributing to higher retention of water and nutrients while preventing soil acidification, the product has the additional environmental benefit of sequestering CO2, a greenhouse gas. 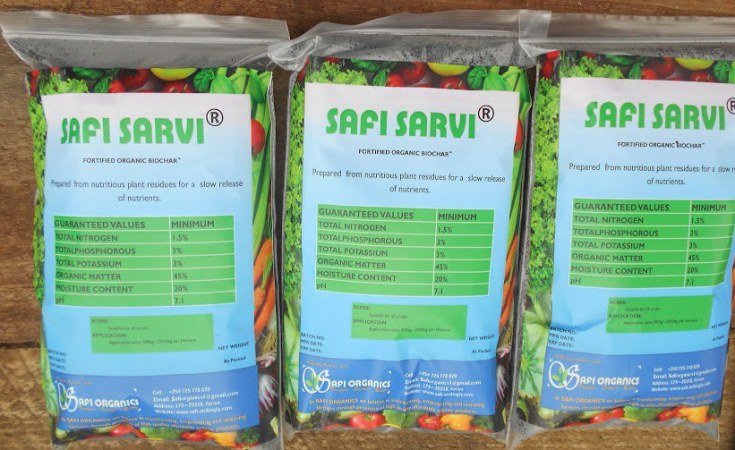 Safi OrganicsBy reducing logistical costs, Safi Organics produces a high-quality product that, at the same price as conventional fertilizers, can improve farmers’ yields by up to 30%.

With its track record of reducing fertiliser costs and increasing farm yields, the company has won several start-up entrepreneurship awards and grants. Last year, SafiOrganics raised it target amount of U.S. S100,000 from the crowd-funding site Indigogo, allowing it to accept “an exciting offer by the Nakuru County Government to expand our services to farmers in its county fertilizer subsidy program,” Safi said in its Indigogo campaign. “This contract is for payment on delivery, and as part of this campaign, we are seeking an increase in our working capital in order to deliver on an order of this magnitude.”

The grant from USAID, USADF and Citi Foundation was another boost in 2019, allowing Safi Organics to expand operations and reach more farmers across the country.

Starting a business is challenging, and now all the Mandela Washington Fellows are facing a new threat – the COVID-19 pandemic. “With current travel restrictions in Kenya, most farmers are now unable to sell their produce,” says Kemande. Farmers who were producing flowers and food crops for the export market are witnessing cancellation of their orders and are now uncertain of the future. Across Kenya, many farmers are sending their employees home.

“If this situation persists, it will force us to close down our business,” Kamande says, “because we will have no supply of farm inputs. If the pandemic continues during the planting period, production of staple crops such as maize, wheat, rice – which are our raw materials – will be affected.

“We will be unable to make any fertiliser and as a result, will also not be able to pay our employees as we rely on the sales of our fertilisers. The government and policymakers should ensure that small-scale farmers are supported during this time to ensure that farm inputs and produce are freely flowing while ensuring their safety and well being.”

For Safi Organics, there is a silver lining. They have been recording an increase in sales for the past three years. In 2018, they recorded nearly U.S. $40,000 in sales, and in 2019 close to $100,000 . Earlier this year, the value of the company on discounted cash flow valuation stood at 1.5 million U.S. dollars.

Kamande and Rigu still have hopes for success when re-opening is possible. “The company plans to expand to other counties in Kenya and create more fertiliser plants”, says Kamande. “We have a target of ten new plants. Narok, Bungoma and Meru counties have wheat and coffee waste. Outside Kenya, we are eyeing Tanzania, as they also have rice farms which produce many tonnes of waste”, she said.

As Kenya and east Africa began to rebuild their economies after lockdown, Safi Organics’ approach of using locally available farm waste to enrich soils will become even more important.  Promoting profitable agriculture for rural small-scale farmers, while conserving long-term productivity and fertility of the land, can make a critical contribution to food security in a region facing changing weather patterns and locust invasions.